This benchmark counts the number of triangles in a given undirected graph. It uses a new graph partitioning scheme that avoids communication during triangle counting.

The graph below shows the performance of distributed triangle counting (DistTC) on Bridges cluster at the Pittsburgh Supercomputing Center. We used up to 64 NVIDIA Tesla P100 GPUs located on 32 distributed machines with 128GB DRAM each. Each P100 GPU has 16GB of memory. Each node in the cluster has 2 Intel Broadwell E5-2683 v4 CPUs with 16 cores per CPU. The nodes in the cluster are connected through the Intel Omni-Path Architecture. We run on five graphs (friendster, gsh-2015, rmat26, twitter40, and uk2007) on up to 64 GPUs (32 nodes on Bridges). The below table show the properties of the input graph. rmat26 is a synthetic graph generated by an RMAT generator; twitter40, friendster, uk-2007, gsh-2015, and clueweb12 are web crawls. Input graphs are symmetric, have no self-loops, and have no duplicated edges. 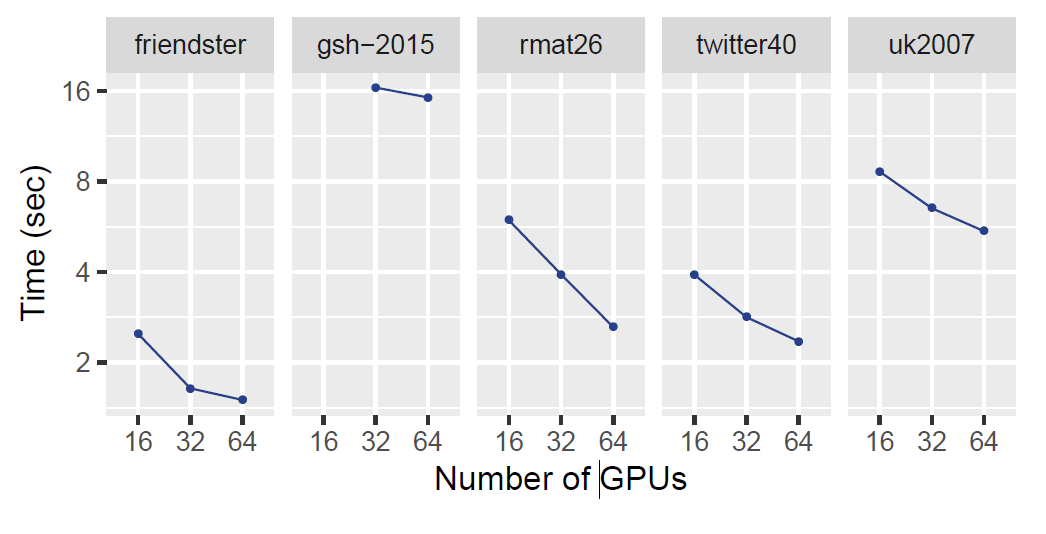